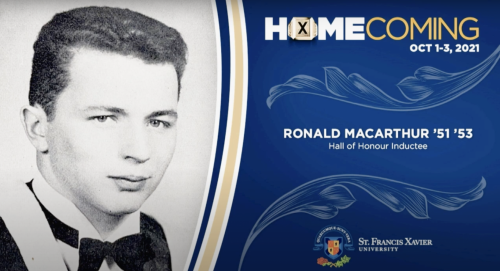 Recently, CBBC Career College founder Ronald MacArthur, was posthumously inducted into the St. Francis Xavier University Hall of Honour and we couldn’t be more proud. Ronald was a great man and this honour is well deserved.

The presenter that evening gave a spectacular overview of Ronald and his commitment to education and to making our world a better place, It was too great and too powerful not to share:

“Our final inductee this evening into the hall of honor, on what would’ve been his 70th homecoming, is Ronald Gerard MacArthur from the classes of 1951 and ’53. Ron came to StFX from Glace Bay following in the footsteps of eight of his 13 siblings.

There’s no question that StFX tradition runs deep in the MacArthur family. After receiving his bachelors of education degree in 1953, Ron spent four years teaching a high school at Riverview high school in Coxheath before marrying Sally McDonald, in 1956. They had five children, Mary Elaine from the classes of 1979 and ’81, Allen from the class of 1982, Brian from the class of 1988, and my floor mate from MacIsaac house, and twins, Cathy and Peggy.

Peggy was born with spina bifida, and this sparked a passion in Ron, who created the Cape Breton chapter of the Spina Bifida Association. To this day, the association still provides resources and tools to help individuals and families dealing with spina bifida.

In 1958, Ron, along with a fellow Xaverian and colleague from Riverview high school, decided to leave public education system to launch the Cape Breton Business College (now CBBC Career College), a school that would produce over 10,000 graduates during his lifetime and is still operating three campuses in the province today.

Ron was a founding member of the Whitney Pier Minor Hockey Association and was involved in the sport, as his boys went through the programs.

The late Ron MacArthur was an entrepreneur and visionary. He was polite, articulate, engaging, and charming, and he had a monumental impact on the lives of thousands of Cape Bretoners.”