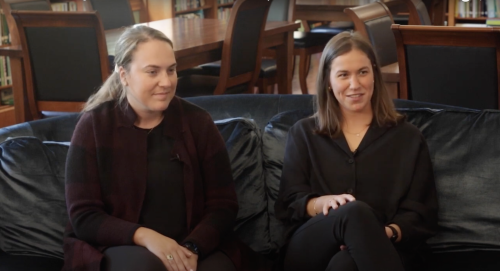 Recently, CBBC Career College founder Ronald MacArthur, was posthumously inducted into the St. Francis Xavier University Hall of Honour. We are so happy that his incredible contribution to education in Nova Scotia is being recognized and it is an honour to be able to carry on with that tradition in his name.

Part of the induction ceremony featured an interview with Ron’s granddaughters, Moira MacArthur and her sister, Megan MacArthur. They shared beautiful memories of their grandfather which we would like to share here with you!

Interviewer: Where did your grandfather grow up?

Megan MacArthur: He grew up in Sydney. He was born in Glace Bay, Nova Scotia.

Okay. One of the things that the university takes great pride in is the relationship between staff and students. Are you able to talk about any member of faculty or staff who might have had a very positive impact on your grandfather in his time?

Miora MacArthur: Yeah. We were able to ask our grandmother, Sally MacArthur about that specific question, and I didn’t actually know this, but we have an uncle Allen. He graduated from StFX in ’82, but he was named after one of our grandfather’s professors during his time at X named Father Allen McKenna or sorry, McAdam yeah. Father Allen McAdam. And yeah, he taught our grandfather theology during his time at X clearly he made an impact on him enough for him to name one of his own sons after him. Yeah, I didn’t know that story, but it was kind of nice to, to hear that.

Very nice actually. Xaverians are well known for their services to the communities in which they live or reside. Are you able to talk about some of the projects or initiatives that your grandfather might have been involved in after he left the university?

Megan MacArthur: Yeah, so my grampy, he started the Cape Brenton business college in 1958. Since then, today there’s been 15,000 graduates from Cape Brenton business college. So he was a founder of that school, and my father worked with him closely, five years before my grandfather retired. He was a big part of that school, a great principal, a great teacher, and he also was a big member of the Cape Breton Whitney Pier Hockey Association. He and a lot of those members went on to play StFX hockey too. He was a great member of the community in Sydney.

Excellent. I know that one of you, I’m not sure who, but one of you currently is wearing your grandfather’s X rings. Do you want to talk about your feelings about X ring day that you celebrated and maybe your decision to wear his ring rather than to buy a new one for yourself?

Megan MacArthur: Yeah, so my grandfather, he lost his X ring when he was really young, he was washing his hands and he just misplaced it and forgot it, but in 2006 Christmas time, my father and his brothers and sisters, they bought him a new X ring for Christmas that year, and I remember I was only 10 years old, but grampy was so excited. He said it was one of the nicest things anyone’s ever done for him, and he was just as happy to receive the X ring that day then he was on his X ring day.

Megan MacArthur: I just thought that was really special for me because I sort of look at this X ring almost like… I say this to myself, it’s kind of like a good luck charm. It’s always with me, it’s grampy with me, and I was so excited to have it because it’s just a piece of him that reminds me every day that he’s with me or you know, he’s watching out for me, and I was really excited to have it just so we could share that common bond on X ring day. I know grampy would be proud to know that I’m wearing it today.

Miora MacArthur: And also I think I can touch on too. I remember that night, that Christmas Eve in 2006, so I was in grade seven and I still remember it fondly. He wasn’t expecting it at all, and I remember he opened it up and he shut it. He opened it up, saw it and shut it. He was speechless completely speechless, and now after the anticipation, as a Xaverian of X ring day, we can both appreciate, like Megan yours is extra special having grampy’s ring, but all Xaverians can relate to December 3rd, and what that day means to everybody. It’s such a big, exciting, important day. But now I understand what he was feeling that evening, he kept looking down at the ring that night. Then when I got my ring in 2016, I was thinking to him of course, and feeling that mutual feeling that he felt that night, looking down at your finger all the time. Even months after X ring, you’re always just kind of looking at it, looking at the ring, but yeah, we can now appreciate even more how much that meant to him.

Wonderful. So your grandfather’s always with you.

Miora MacArthur: Again, we were asking our grandmother, Sally, about that and one big thing she said was friendships. He had lots of great friends that he met here along the way, actually at his funeral mass and his celebration of life, one of his good friends, Father Sid Mifflin, came to Sydney that day and was up on the altar with the priest that day in Sydney. We met him that day, and then of course during my time at X I was able to meet Father Sid as well, but back to fond memories at X we’ll take it back a few more years, but Megan and I grew up playing hockey a lot. Girls hockey was big here in Antigonish too, we would travel for games quite often and grampy would hop in the car some mornings for the ride and always in the rinks, either the town rink or the Millennium Center watching us play there.

Miora MacArthur: But I remember a few times after him, wanted to walk around campus and we were only little, probably, between eight and 10, 12 years old, again, not fully appreciating really what StFX meant, but would always love coming to Antigonish. But I just remember walking around with him and he’d be like smiling with pride almost just walking around campus. I remember walking up University Avenue with him and him pointing out Cameron hall to us and saying, “Oh, I lived here.” and looking at Morrison hall and saying, “Oh, we ate there and lived here.” and then foreshadowing a little bit because Megan and I both ended up living in Cameron hall as well. And his mother actually grew up on Church Street. I also remember him pointing out the house that his mother grew up in, and I lived in on Church Street my fourth year, right across the street. You could tell, I remember walking around campus with him, was bringing him back a little bit and smile on his face for sure, just for reflected all of his great years and great memories that he had here on this campus and in this town.

Lovely. I’d ask you, what does it mean to your family and to yourselves to have your grandfather inducted into the hall of honor?

Miora MacArthur: We want to thank the committee here for recognizing him, also thanking everyone who nominated our grandfather, Gary Jennings, Debbie Champion, and Norma McDonald. They wrote beautiful letters of recommendation and recognition, but it’s nice that he’s honored and recognized in this way by such a special, special place to him. He loved it here at StFX he was a huge member of the community, and that’s what communities all reflected in StFX and Xaverians. He helped a lot of people during his career, and he always wore that X ring on his finger and-

Miora MacArthur: Very proud alumni, and that reflected in Megan and I coming here and three of his five kids coming here and we’re just very proud, and we’d like to thank everyone on behalf of our entire family and our grandmother, Sally MacArthur as well. We just feel very proud of him and thankful that he was recognized and just appreciative that his name will be on the hall of honor forever. We’ll come back and see it and see him. His name’s always here.